Le Portel site is one of the first InnoVent’s wind farms, installed in 2001. For 21 years, these four 750 kW wind turbines have been installed along the Carnot dike, a very good site, very windy. But today, salty air and ocean spray have worn out the machines, which are increasingly difficult to maintain because of the obsolescence of certain parts. The site is therefore underexploited because the availability of machines is not optimal.

All these reasons prompted us to apply for a repowering in 2019 and obtained in August 2022. The machines will therefore be dismantled by the end of August 2023 at the latest and replaced by a single machine with a capacity of 3.8 MW. It will also be positioned on the Europe wharf, 700 m back compared to the existing wind turbines, and therefore much better protected from the sea.

But what will happen to the dismantled wind turbines? Will they be recycled? 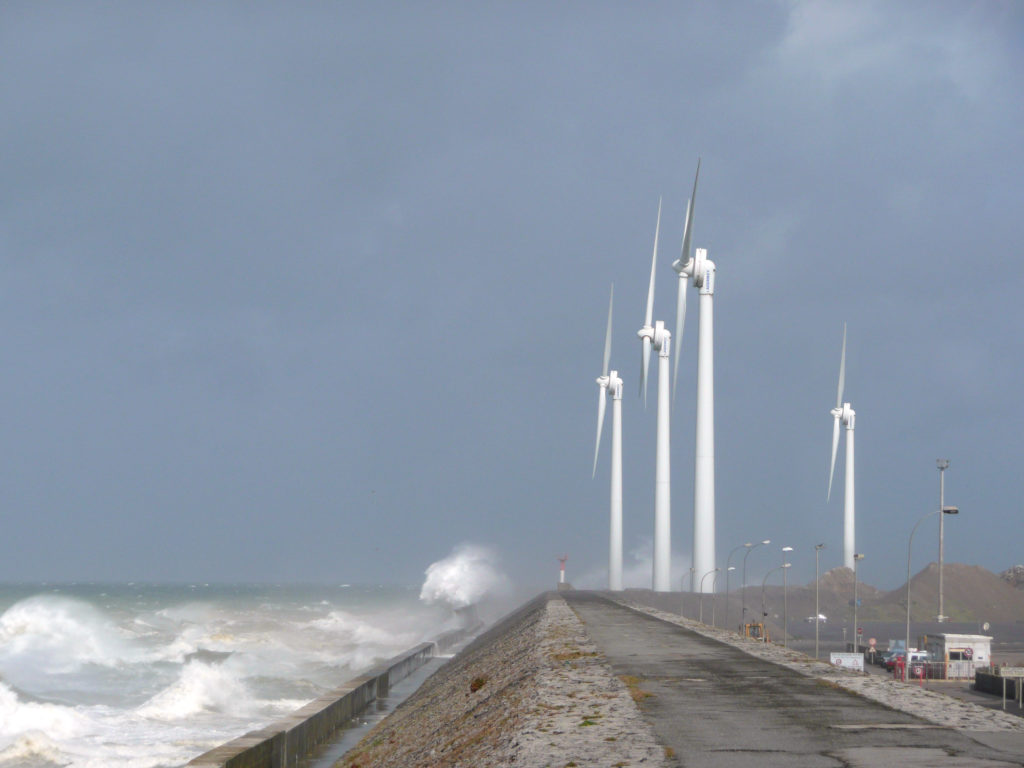 Contrary to popular belief, wind turbines are mostly recyclable (more than 90%) and the industry continues to improve in this area. For example, last year Siemens Gamesa launched the world’s first recyclable blade and announced that it would only produce 100% recyclable blades by 2040. A major advance in the field! Another example is the ZEBRA project.

According to the French Environment and Energy Management Agency (Ademe), wind turbines have an estimated lifespan of 20 to 25 years. This duration varies from one wind farm to another, depending on the location, weather conditions and other factors that may reduce or lengthen this lifespan. When they wear out and the materials degrade, they become less efficient and more costly to maintain.

As stated in the FEE, the treatment and recycling of wind turbines is provided for in the 2008 Waste Framework Directive, transposed by the Circular Economy Act, into the Environment Code. The materials are treated according to the key principle of the waste hierarchy, which aims to extend the service life of existing plants and optimize the materials used for the blades.

When wind turbines cannot be reused, priority is given to recycling. Metals (steel, copper, cast iron, aluminium) are completely recycled, and composite materials are handled by specialized sectors in the context of thermal or energy recovery. It is also in no case possible to dump the blades of wind turbines in an EU country, nor to abandon wind turbines on French territory.

Contrary to popular belief, the presence of rare earths in wind turbines only affects 3% of onshore wind turbines (Source: Ademe). It is in fact entirely possible to design wind turbines without rare earths, which is a technological choice of the manufacturer. For the relevant machines, a recovery process for the reuse of rare earths during dismantling has been put in place. For example, they are reused in the automotive industry.

As a reminder, the problem of rare earths is not, contrary to what seems to indicate their name, their rarity, which are in fact as common as metals like copper or nickel. The problem is their extraction, which is polluting. Rare earths are used everywhere: in our smartphones, our computers, jet planes, cars, etc.

Here is, point by point, what the various components of Le Portel’s four wind turbines will become:

Concrete used for foundations is 100% reusable in the construction industry.

Mast / Basket / Generator / Hub / Cables: these elements are composed of metals and therefore highly valorizable. They will be resold to a specialized company that will crush and sort them. Metals (ferrous or non-ferrous) will be able to be reused as raw materials in the industry. Non-metals, on the other hand, will essentially end up as waste. Overall, we should achieve an average 95% valuation of these items.

High voltage cells/ transformers/ electrical cabinets: these will be used as spare parts. They can be reused for other projects or resold.

Are wind turbine blades recyclable? The answer is: it’s complicated! Indeed, they are composed of composite materials, which makes it difficult to recycle them. Current technologies do not allow for separate components to be reused as raw materials. Projects such as Siemens Gamesa or ZEBRA mentioned above are encouraging for the future. For Le Portel, several valuation solutions are being considered, including:

Reuse of all or part of the machines so that they can be reinstalled at other sites is also considered.